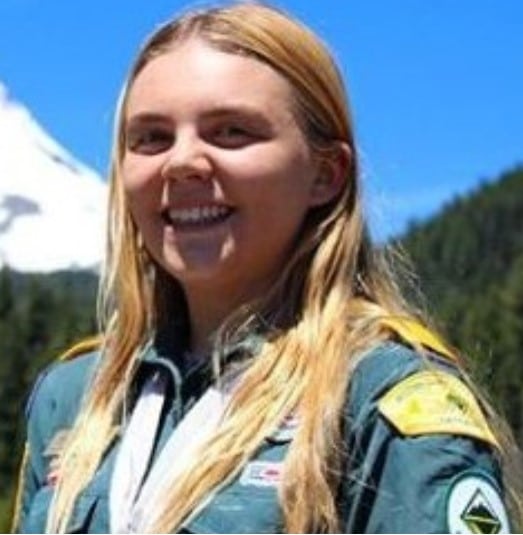 Los Angeles 3/18/2019 – 19 year-old Venturer Natalie MacEwan from Winnetka joined eleven other Scouts from around the country last week to present the Annual Report to the Nation to our country’s leaders in the nation’s capital. The annual tradition takes place each year as Scouts are selected to represent the Boy Scouts of America (BSA) in presenting the previous year’s milestones to Congress as required by the organization’s Congressional charter. This report outlines the BSA’s contributions in character, adventure and leadership over the past year. The 2018 Report to the Nation is particularly special as it marks the inaugural year when the Cub Scout program welcomed both boys and girls.

The impact of Scouting in 2018 across the U.S. included:

“It was an honor to represent the Boy Scouts of America, my council and my hometown in this tradition,” explained Natalie. “Hearing from our nation’s leaders about how much they respect Scouting and the impact it has on young people makes me hopeful that the experiences I have had in Scouting will continue to empower me as a leader in my community.”

MacEwan was selected to represent the BSA’s 2.2 million youth participants and nearly 1 million adult volunteers because of her exceptional work as a member of Venturing Crew 22, based in BSA’s Western Los Angeles County Council.

“We are thrilled Natalie had the opportunity to join this group of exemplary Scouts,” said Matt Thornton, Scout Executive of the Western Los Angeles County Council. “We were proud to nominate Natalie for this honor because she is an exceptional young woman that lives out Scouting’s principles in the commitment she brings in service to our community every day.”

Miss. MacEwan and her fellow delegates embarked on an incredible week that included visits to the NASA Goddard Space Flight Center, the United States Naval Academy, Mount Vernon, the Pentagon, the Capital and the White House.  The Scouts also stepped in to support the National Park Service during a service project to update the Korean War Memorial during their visit.

Outside of Scouting, Natalie succeeded in both academics and athletics as a triple-sport varsity athlete recognized by CIF, named one of the top ten finalists for the National Wendy’s High School Heisman, is a Foot Locker Scholar Athlete, Elks 2018 Most Valuable Student, and a Questbridge Scholar.

Natalie attends the University of Southern California with a full scholarship, double majoring in International Relations Global Business and Spanish, and plans on graduating and continuing to serve by commissioning into the United States Air Force in 2022.

This camp is closed for camping this summer

Provide the Information below and
an Ambassador will Contact You!